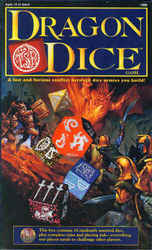 In 1995, TSR’s Dragon Dice game won the Origins Award for Best Fantasy or Science-Fiction Board Game. I’m pleased to have been lead designer on that project. What’s more, when Wizards of the Coast purchased TSR and decided to cease its publication, a group of fans formed SFR, Inc. to purchase the rights and keep it in print. They’ve done a marvelous job polishing and expanding it ever since.

With this chapter, Dragon Dice‘s world of Esfah joins the D6xD6 RPG, using actual dice from the collectible battle game!

Esfah is a young world, seething with the raw magical elements of Earth, Air, Fire, and Water. It is also a world at war, long waged between the elder races of Coral Elves and Dwarves on the side of the goddess Nature, and the upstart races of Goblins and Fire Elves on the side of the Death god. Caught in the middle, though generally fighting for the good, are the Amazons. The terrible Undead have also risen, along with new races created by Nature and Death in this struggle for supremacy. It is into this contentious time that your character has been born.

Common occupations for adventurers in this world include soldier (foot or cavalry), archer, mage (battle or scholar), hunter or tracker, ruffian (street thief or burglar), healer (magical or surgeon), spy, and traveling musician. Any number of other vocations are also possible—see chapter 5, “Occupations,” for inspiration.

Languages: Each race on Esfah has its own native language; there is no “common tongue.” Characters may learn the languages of other races.

Each magical element also has its own language. Consequently, most races can speak three languages—their native tongue and (even if haltingly) the languages of their two racial elements.

Literacy: The ability to read is not widespreadd. Only characters with a scholarly occupation or with the Literacy or Magic skill can read and write the languages they know.

Magic: Like Language, this skill can be taken more than once, as one of the five elements—Earth, Air, Fire, Water, or Death.

Although this setting can be played with standard d6xd6 rules, it is best represented with a d8 terrain die and a d4 rare magic item from the Dragon Dice battle game. (Treat the special symbol on the magic item as a “4.”) This gives a range of 1–32 instead of the standard 1–36, so characters have a maximum Focus rating of 8 instead of 10. Choose up to 7 Focus skills during character creation instead of the usual 9.

Most Dragon Dice fall into Common, Uncommon, and Rare categories, with increasing toughness and abilities. For role-playing purposes, treat Common creatures as thugs, Uncommon as lieutenants, and Rare as villains (see chapter 10, “The Game Host”), reducing Focus number one point for the d4xd8 option. Use each creature’s Dragon Dice symbols as a guide to its skills.

The following races are usual for players’ characters. Note: Characters from the long-lived Coral Elf and Dwarven races may list age as “young,” “mature,” or “ancient” rather than a specific number.

Amazons: Human warriors, primarily though not exclusively female, capable of learning any magical element, though without a terrain bonus.

Coral Elves: One of two original races of Esfah, masters of Air and Water magic. Most at home in coastal lands.

Dwarves: One of two original races of Esfah, masters of Earth and Fire magic. Most at home in volcanic mountain ranges.

Feral: Brought to life by Nature to help battle the Undead, these half-beast peoples come in all types and are aligned with Air and Earth magic. They are most at home in highland forests. Some can fly, some swim, some burrow, depending on their animal type. Some have a thick hide equivalent to one point of armor (with no penalty). Most have claws equivalent to a small blade. Exact effects are left to the game host and the player.

Treefolk: Brought to life by Nature to help battle the Undead, Treefolk are a conjoined pairing of tree and water spirits. Aligned to Earth and Water magic, they are most at home in wet forest lands.  Their bark-like skin is equivalent to one point of armor (with no penalty). Their limbs hit like clubs. Treefolk with the Throwing skill have a relatively endless supply of “throwing blades” (twigs or thorns) and can use their own branches as “spears.” Those with the Shooting skill carry bows made of branches and vines and can use their own branches as a relatively endless ammunition supply.

Minor elemental magic effects—digging a small hole, summoning a cooling breeze, creating a candle flame, freshening a canteen, killing a weed—can be accomplished with a single success. Such things add flavor and move a story along.

More powerful magic that causes or cures damage can be adapted from the battlefield spell lists of the Dragon Dice game, using these guidelines:

Note: Remember that in this world a summoned dragon is uncontrolled and will attack whatever draws its attention—usually the largest creature first.

The following creatures share the world of Esfah but are not typical players’ characters.

Acolytes of the Eldarim: Rare heroes with a mastery of dragons, the Eldarim lead solitary lives away from other creatures. Like dragons, different Eldarim are aligned with different magical elements.

Firewalkers: Drawn to Esfah by the chaos of battle, these elemental creatures fight on any side for the sheer joy of it. They have an affinity for Air and Fire magic.

Frostwings: Created by the god of Death, these creatures proved uncommitted to the war. Frostwings have some affinity for Air and Death magic but gain no terrain bonus for either. The are most at home in icy realms.

Goblins: The first race Death raised to fight the ancient Coral Elves and the Dwarves, Goblins have an affinity for Death and Earth magic and prefer swampy terrains.

Lava Elves: Following the goblins, Death created Lava Elves as a mockery of the noble Coral Elves. They have an affinity for Death and Fire magics and dwell within the hearts of volcanic highlands, in direct competition with the Dwarves.

Scalders: Twisted by Death from their fey folk origins, Scalders eventually threw off Death’s reins and became their own masters. They have an affinity for both Fire and Water magics and make their homes in outlands with hot springs.

Swampstalkers: A mutated race of serpent creatures, Swampstalkers are aligned with Death and Water magics, though they no longer serve the god of Death. They are most at home in swamplands.

Undead: Raised from the slain warriors of other races and pressed into Death’s service, the Undead have an affinity for Death magic, and they have no homeland other than the corpse-strewn battlefields of the world.

Dragons: These elemental creatures are summoned up from the terrain of battle sites as a desperate measure against an enemy, after which they rampage about.

Other Monsters: Each race has a subset of “monsters” sometimes pressed into service, from the Leviathan of the Coral Elves to Minor Death of the Undead. The game host is invited to adapt the abilities of those specific dice to these role-play rules.

Sample Adventure: “Trail of the Dragonsword”

In which a band of heroes, resting from war, must make a treacherous journey to deliver an evil artifact into the safekeeping of a Coral Elf monastery.

Act I: A Bolt from the Blue

Following the Battle of Wolverton, the Dwarven king Boralan set aside the highland valley of Benéfictoram as a refuge for veterans of all allied races. The valley shelters ample woodland and pasture for any who would choose to make a home here. It is now dotted with hamlets, small farms, smithies, and breweries. The players’ characters are either residents of or visitors to this valley. Let the players explain their heroes’ presence and establish who knows whom.

The adventure begins with the most solitary hero. One day, from a clear blue sky, a blinding flash of light and deafening clap of thunder drop a torn and bloodied Dragonlord at the hero’s feet. Clutching an ebony black sword longer than he is tall, the Dragonlord whispers, “Deliver this to the Monastery of Èlasmiél,” and, “Beware Maladruke!” then dies.

Give the heroes time to connect with one another and sort out plans.

Along the route to Èlasmiél, the heroes will encounter a series of challenges.

This series of events should leave the heroes worn and depleted.

Act III. The Monastery of Èlasmiél

Leaving the fens, the heroes spy the seaside city of Èlasmiél. Coral Elf Horsemen, Knights, and Eagle Knights patrol the area. As the heroes proceed, Maladruke attacks. Their only hope is to make a dash for the city while a dozen Coral Elves swarm the dragon. Reaching the city gates requires 20 movement successes (per hero) before the dragon slays the patrol. After a round of facing the dragon’s four brawling attacks, the patrol falls back to use missile and magic, so Maladruke can attack only one defender per round. Some heroes might either help the Coral Elves or cast spells to speed the sword bearers’ along.

Once the sword is inside the city, the dragon flies back to the Swampstalkers’ fen with a cry of frustrated rage. The heroes are celebrated for delivering the sword and offered a place to stay until the dragon has been dealt with more permanently.

Maladruke is a monster (see chapter 10, “The Game Host”), with a Focus of 2. His “Occupation” is Death Dragon, giving Death magic with four pluses, and Death Breath, which does Kill damage to a single figure at “Shooting” range. His movement rating is 10 meters per round by air or on foot. His size makes Throwing range Brawling range for him.

His Focused skill is Martial Arts, with up to four attacks per round; his paws do Hit damage, his tail Knockout, and his jaws Wound. His Unfocused skills are Tracking (up to “Viewing” range), and Coral Elf and Dwarf languages.

He has four levels of natural armor with no dice penalties. He can spend 13 drama points per session, though only one experience point per session. His death sword doubles his magic successes and has a damage rating of Kill plus two.

In a world so much at war, the players’ heroes can serve as emissaries, ambassadors, spies, and assassins, shaping Esfah’s history. As their skills and reputation grow, they may eventually be invited to study the ways of the Eldarim.