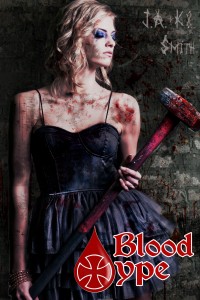 When a biotech company’s virus reaches the general populace, horrific results ensue, based on each person’s blood type. Your characters must learn to survive their particular blood-borne curse in this post-apocalyptic world.

Located in the Idaho panhandle, Sandpoint is a small city with a big heart. Its population, as of the 2010 census, was 7,365 souls. It lies on the northwestern shore of Idaho’s largest lake, the 45-mile-long Lake Pend Oreille, and is surrounded by the Seikirk, Cabinet, and Bitteroot mountain ranges. It is the county seat for Bonner County; is home to Idaho’s only railroad stop, the Sandpoint Amtrak Station; and is the site of Idaho’s largest ski lodge, the Schweitzer Mountain Resort. In 2011, Rand McNally and USA Today named Sandpoint the nation’s “Most Beautiful Small Town.”

But that’s all in the past now. Yesterday, SMART announced that a government-contracted virus research project somehow breached its labs and put the city’s population at risk. SMART security forces began rounding up Sandpoint’s citizens and treating them with an antigen. Today, National Guard and Reservists have arrived to help deal with the crisis. The streets are filled with armed, uniformed figures, and some lab workers in sealed biohazard suits. Many of your neighbors have not returned from yesterday’s clinic visit. And you’re not feeling so well yourself.

Welcome to the future, where your fate is dictated by your blood type.

Characters in the “Blood Type” setting can be of any modern occupation that would have them employed in or visiting Sandpoint, Idaho.

The default skill list of chapter 6, “Basic Skills,” will serve.

Blood and flesh play critical roles in this setting.

Each character’s blood type determines that character’s fate from the virus or its vaccine. (SMART Industries is not currently forthcoming about what exactly causes the mutations, if they even know.) It is recommended that players design characters matching their own actual blood type (though this is not a strict rule).

Characters with the O– blood type are immune to the virus and its vaccine. It does not affect them in any way.

The virus causes characters with an A– or B– blood type to develop slightly sharper senses than normal humans: add a + to their Wits attribute. Unfortunately, the virus also gives them a blood thirst. It burns a liter of their blood daily, which they must replenish by drinking that amount of untainted blood, animal or human. Unlike “vampire” characters (see below), leech characters do not develop inhuman fangs.

In characters with the AB– blood type, the virus leads to much sharper senses than is normal for humans, especially their sight and hearing; add 2 +’s to the Wits attribute and a + to Grace. However, this also makes them sensitive to sudden bright lights and loud noises. Their blood thirst is such that their bodies burn a liter of blood every six hours. Their canine teeth are noticeably long and sharp. These characters have a bonus ability of psychically communicating with and calming berserker zombie (AB+) characters. On a successful Focused roll, a “vampire” can connect with a single berserker. By concentrating on this connection (suffering a 1-point penalty to subsequent action rolls), the vampire can maintain this connection and communicate one word each round. If psychically connected to more than one berserker (acquiring a 1-point die penalty for each), vampires can project the same word to them all. Often that word is “Calm,” preventing the berserkers from becoming frenzied and attacking their own companions.

In these characters, the virus leads to slightly sharper senses than normal for humans, and a much higher strength; add a + to Wits and 2 +’s to Brawn. Unfortunately, the virus also requires a kilogram of raw, untainted meat every four hours, or the “living zombie” begins to suffer damage as the virus attacks the character’s own body.

Characters with the AB+ blood type are the most tragically affected by the virus. They must eat a kilogram of raw, untainted meat every hour to feed the virus, or suffer damage as it breaks down their own tissues. As eating machines, they are much faster and stronger than a normal human; add 2 +’s to both Grace and Brawn. When they are frenzied (see “Starvation and Frenzy” below), these ratings are temporarily doubled.

Because their blood never fully developed into any of the usual blood types, characters with the Bombay phenotype (only 0.0004 percent of the world’s population) assimilate the virus fully, becoming a new sort of creature altogether. Extremely cunning, intelligent, and fast hunters, they gain 2 +’s each to Grace, Wits, and Will. Their extremely sensitive senses allow them to see well in all but total darkness, to scent their prey from a kilometer away, and to hear at twice normal human distance. This also means that they are very sensitive to bright lights (being unable to withstand even normal daylight) and loud noises (especially sudden, unexpected ones). Their bite is infectious (passing the virus on to others), and their claws do damage like a small blade. Although they do not have to drink blood or eat raw meat to sate their virus, they have a taste for both and will gorge themselves whenever possible.

The human stomach can normally hold about a liter of contents, but it can be stretched to contain at least four times that amount. For purposes of these rules, a kilo of meat and a liter of blood are treated as roughly the same volume. Characters with a Brawn Focus can hold an extra liter in their stomachs; each + on Brawn also adds a liter of capacity.

In addition to Drama Points, infected characters (any of the A, B, or AB combinations) can “burn” the blood or meat they subsist on, to add a bonus to their dice rolls. Each liter/kilo burned is treated as a Drama Point for this purpose, and the normal Drama Point rules apply.

As they begin to starve (once their stomachs are empty of the necessary blood or meat) virus-infected characters must pass a Will roll to avoid frenzy. (For berserker characters, this Will roll is rated Difficult.) A frenzied character will attack the nearest source of blood or flesh—including their friends and loved ones if nothing else is available. They will gorge upon this food until their stomachs can hold no more, at which point they regain volition.

Example: Della Marchan has the rare HH-OH blood type, making her a “Blood Beast.” Before the virus, she had Brawn Unfamiliar, Grace Focused, Will Unfocused, and Wits Unfocused. The virus has boosted those attributes with 2 +’s each to Grace, Wits, and Will, making her new attribute ratings Brawn Unfamiliar, Grace Focused++, Will Focused+, and Wits Focused+. Against brawling attacks, Della’s enhanced Grace gives her three levels of passive defense. Against throwing attacks, her Grace and Wits combined give her five levels of passive defense. Against shooting attacks, her Will gives her two levels of passive defense. Additionally, Della can apply her two Grace pluses to skills like Athletics, Lockpicking, and even Martial Arts. She can apply her single Wits plus to skill rolls such as Navigation and Persuasion. The game host might also agree to let her single Will plus apply to Bargaining rolls.

Besides the equipment normally available in a modern setting, SMART Industries personnel have access to advanced technology. A few examples include…

Chemical Sniffer: This kit is similar in appearance to a Geiger counter and can track the scent trace of any virus-infected person as well as any bloodhound. People with O blood types are undetectable to it, however.

Computerized Scope: This item can be mounted on any shooting weapon, giving its user a dice bonus of 1. It can be used even in total darkness (though its light makes the user’s face visible to others). It is powered by two standard AAA batteries and has the life span of a standard pen light.

Laser rifle: This shooting weapon has a damage rating of “kill” and an integrated electronic laser-guided targeting system giving its user a dice bonus of 2, and an effective range of 300 meters (rather than the standard 200). It can fire 6 shots per charge (7 with the targeting system turned off) and can be recharged at any standard wall outlet, at 10 minutes per shot.

Nutrient Injector: Each of these aerosol-powered injectors contains nutrients equivalent to two liters/kilos of blood/meat to fend off the starvation and frenzy effects of the virus. The injectors come six to a pack, and each pack fits in a standard clothing pocket.

Besides facing mutated civilians like themselves, the heroes may also encounter trained security forces, military personnel, or even technologically modified SMART Industries Troops.

Begin by asking the players to describe what their characters are each doing on day one, when the news of the outbreak is released and they receive orders to report for inoculation. Use this as an opportunity to gather the heroes in the face of a common threat to the public health. Adapt exact events to the heroes’ specific blood types, in particular sending any O+ characters home uninjected, as health care personnel let slip that previously inoculated people of that blood type are falling seriously ill. End the scene by describing how the heroes with A, B, AB, or HH-OH blood types go home feeling queasy and feverish.

On day two, SMART Industries personnel begin locking down the town and rounding up its citizens for quarantine (and eventual experimentation). Most businesses are closed due to employees calling in sick; only a few hotels, restaurants, convenience stores, and such remain open with skeleton staffs.

As the heroes watch, SMART scientists and guards work their way through the town street by street, knocking on doors, breaking them down if no response is forthcoming. Residents are ushered outside, questioned, sorted into separate groups (by blood type), and hauled away in military-style trucks driven by National Guard members and Reservists. Bodies of the already dead are unceremoniously piled atop flatbed trucks and hauled away. Most fatalities are the elderly or otherwise frail, but some are clearly victims of savage attacks.

Citizens who resist SMART’s personnel are either tasered senseless, beaten into submission, or summarily executed. This last happens when someone with AB+ blood type succumbs to virus-induced frenzy and rampages, attacking people, flipping cars single-handedly, and committing other acts of destruction.

Give the heroes time to observe the unraveling of their world and to come up with a plan to avoid capture. If they hide, have them found by one or two straggling guards, to provide an opportunity for them to test their new-found strengths—and the accompanying hunger. (Nothing bonds a group like fighting off SMART’s biochemically enhanced guards, then killing and eating a stray dog together to fend off a virus-induced blood frenzy.)

Although it is theoretically possible for the heroes to establish a safe house someplace in town, their best bet is to escape into the wilderness. Someone in the group may know of a remote cabin they can use. Provide one or two more brushes with security forces, then run a climactic roadblock encounter at the edge of town before the heroes make their escape.

One of the best directions for a Blood Type campaign is an ongoing struggle to rescue Sandpoint from SMART Industries’ stranglehold and restore its former glory. Think Resident Evil meets Red Dawn.