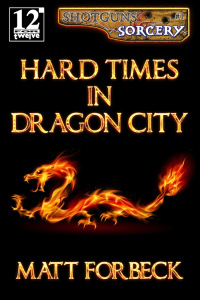 It’s a world made for adventure, a noir fantasy—J.R.R. Tolkien meets Raymond Chandler!

The Dragon City of Matt Forbeck‘s Shotguns & Sorcery series is built upon a mountain. At the top stands the Dragon’s Spire, the palace of the dragon ruling the city. At the bottom sprawl the slums of Goblintown. And between, communities of elves, half elves, humans, and dwarves ring the mountain in order of descending wealth and influence. Outside the city walls stretch the forbidden, undead-infested lands of the Ruler of the Dead, the dragon’s deadly enemy.