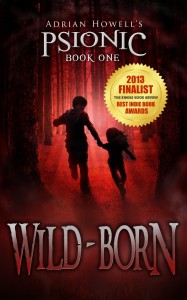 In the Psionic Pentalogy—consisting of the novels Wild-born, The Tower, Lesser Gods, The Quest, and Guardian Angel—as an adolescent boy uncovers his fledgling telekinetic powers, he finds himself thrust unexpectedly into a hidden psychic war. With his parents murdered under a berserker’s mental control, and his younger sister kidnapped, he must learn to survive in a hostile world where seemingly everyone wants him as a pawn.

As a character in this world, you will be able to explore your own psychic powers and choose sides in the hidden war. Or you can play the role of a normal human with special combat training and knowledge of that bloody struggle. In either case the stakes are high, with lives—and more—hanging in the balance.