Adventure in the steampunk Empires of Steam and Rust setting created by Stephen D. Sullivan and Robert E. Vardeman!

Heart of Steam and Rust 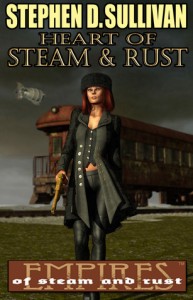 Imagine waking up in a strange hospital with no memory of how you got there and surrounded by people who might be your enemies. Russian agent Lina Ivanova finds herself in just such a predicament. To make matters worse, she quickly discovers that someone is out to kill her — and the last attempt nearly succeeded. Now she must navigate a maze of plots and counter-plots and even face Rasputin himself if she is to save her own life. Fortunately, Lina has an advantage that none of her foes suspect.…

Heart of Steam & Rust is a stand-alone novella set in The Empires of Steam and Rust world. Filled with intrigue, betrayal, and plot twists, this story will satisfy even the most hardboiled steampunk, action, and espionage fans. The story features Pavlina Ivanova, from Sullivan’s Steam Nations stories.

Gateway to Rust and Ruin 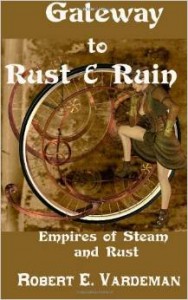 Sir Francis Barstow has unlimited funds from the alchemist’s dream—he can transmute lead into gold with a special ray confined to a Cornish coal mine. To exhaust generated fumes from the electrical equipment, he uses a strange black portal only a foot in diameter—the portal opens onto an entire new dimension, the World of Rust.

Other, larger holes have appeared across the world. The Kaiser uses one to smuggle contraband from the United States into Switzerland in preparation for launching a great war, but he is opposed by a brilliant scientist unwilling to thrust the world into such devastation. To achieve his ends, the scientist explores the Rust World to scavenge technology unavailable anywhere else.

Sir Francis and the lovely French aviatrix Nicole Larouse find themselves in conflict with the Kaiser, his subjects, and those who would use the strange black portals to a different world for their own purposes.