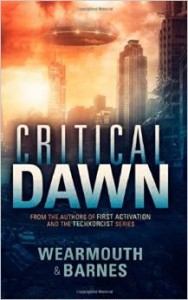 An archaeological discovery at the lost colony of Roanoke awakens an alien race, hidden from the dawn of time. As the invaders set about enslaving and even harvesting humans while terraforming the planet, some people collude with the aliens, while others fight a desperate resistance. That is the essence of Critical Dawn, a wonderfully told story, with twists and turns that will keep you guessing to the end.

With this setting chapter, you can take part in humanity’s struggle to survive against superior technology awakened from thousands of years of slumber!