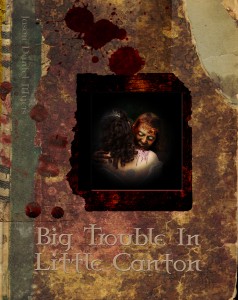 Nothing ever happens in Ohio. Nothing good anyway. But the Big Bad Stuff? Happens. Every. Day.

Strange things skulk the city of Canton. A faith healer who carries a knife. A biker who heads a gang called The Four Horsemen and makes explosives in his spare time. A supernatural entity of unknown origin, returning to the mortal plane after decades of imprisonment. A shape-shifter whose preferred method of transport is flying aloft on monstrous wings. A man so unnaturally strong he tears apart a police car like he’s snapping into a Slim Jim.

And those are the good guys.

The end is nigh. Ancient Snake Gods run the strip clubs. Mouseanthropes infest the city dump. Ghouls consume us, and only the Amish have the faith to fight them. As evil reaches to tear out the heart of it all, who will stand against the coming darkness?

You? Who are you? And how long has it been since the veil was torn from your eyes?

Are you Shawnee, remnants of a people decimated during the westward expansion and only now trickling back to your homeland?

Are you one of the church people who spills supernatural blood on Saturday night and teaches Sunday school the next morning?

Do you work for the Ohio Tourism Bureau, busting heads, cleaning clocks, and sweeping the mess under the rug in order to protect life, liberty and the tourist trade, though not necessarily in that order?

Are you of the Amish, the plain people, a black hat defending the old ways with the power of white?

Are you a Receiver, a schizophrenic, an artist, an electric kool-aid acid tester, tuned in, whether you want to be or not, to the ripples that predators leave in the pond of your city when they emerge to feed or slip back to where they came from?

Are you a Safety Net, a social worker, a beat cop, a runner of late-night support meetings, the first and sometimes only to notice when the weakest of the herd are being culled?

Are you a Fringer, a biker, a stripper, a thief, a dealer who plays both sides, an original gangster who suddenly finds yourself up against something bigger and badder, or an anarchist who’ll fight all comers no matter who, or what, they are?

Are you an Arcane, a broker of knowledge, a book-worm, a lawyer, a museum curator, a historian, a collector of rare objects?

Or do you suck?

Answer the question! Do you suck? Because a monster with a heart of gold has an empty stomach, and a frog who carries a scorpion on his back winds up dead more often than not. So, if you suck, you’d best say so right now, so we can part ways before I’m obliged to kill you.