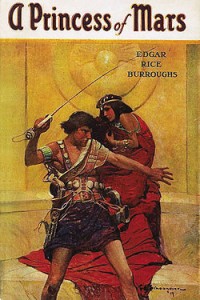 While Edgar Rice Burroughs is best known for his Tarzan novels, he wrote much more than that. Perhaps second best known is his “Barsoom” tales, stories about a dying planet Mars, many featuring the Earth man John Carter. (See the collection, John Carter of Mars, Barsoom Series Books 1-5: A Princess of Mars; The Gods of Mars; Warlord of Mars; Thuvia, Maid of Mars; and The Chessmen of Mars.)

A former Civil War soldier turned gold prospector, Carter one day takes refuge in a forbidden cave to escape Apache warriors, and finds himself transported to Mars. There, among ancient civilizations surrounded by deserts, facing a mix of high science and deadly swordplay, he finds his destiny at the side of a princess.

It is to this setting that Steve Winter of Dungeons & Dragons fame takes you as an Earth man or woman transported to Barsoom, in a mix of Old West meets sword and scientific sorcery. What legend will you write for yourself on the sands of Mars?

To learn more about Steve Winter, visit his blog at www.howlingtower.com