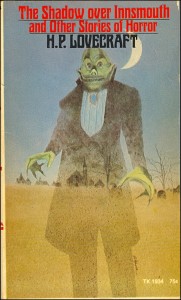 Shadow over Innsmouth photo by Tom

Famed for his masterpiece The Call of Cthulhu, Howard Phillips Lovecraft was arguably a spiritual successor to Edgar Allen Poe, and a progenitor to modern horror authors such as Stephen King.

During his life, Lovecraft openly offered the loose mythology of his writing for sharing, and his own work has entered the public domain. Although contemporaries such as August Derleth came to develop a “Cthulhu Mythos,” adding their own (often more hopeful) touch, Lovecraft promoted supernatural horror and weird fiction based on an inimical cosmos. He also amusedly used the term “Yog-Sothothery” rather than “Cthulhu Mythos,” given that Yog-Sothoth is mentioned in more of his tales than is Cthulhu.

The “Yog-Sothothery of H.P. Lovecraft” setting chapter will reveal how to use the D6xD6 RPG rules to role-play the supernatural horror expressed in Lovecraft’s tales.