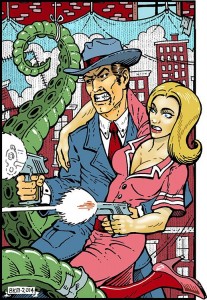 From Bradley K. McDevitt, illustrator, and creator of NightLife and It Came From the Late, Late, Late Show, comes a new setting of loving homage to “A time when men were men, women were women, and monsters were rubber!”

Clenching his teeth, Colonel Hank Chandler shoved his revolver back in its holster. Hot lead didn’t help against the invaders’ war machines anyhow, but the Sherman tank he was riding in shot bullets a bit bigger than a .45. He just had to get the target lined up before it could unleash its death rays. The tank’s treads crunched through the debris that was all that was left of Santa Monica.

“We have to get almost underneath it, don’t we, sweetie?” Sheila, his fiancée, stuck her perfectly coifed head out of the one latch and smiled up at him. Piloting the tank had fallen to her, since most of the original crew had been vaporized.

“Yes, but if we can destroy this one, maybe that will turn the tide! For humanity, and for us, my de…”

Hank’s cell phone rang. Its ringtone, some annoying pop song his boyfriend had downloaded the week before, echoed throughout the ruins.

“Cut! Bill, I thought I asked you to put your phone on vibrate!”

“Sorry, Joe, I thought I had. New phone, I still haven’t figured out half its functions. Gimme a sec here.”

It was his boss. As he had just known it would be.

“Hey, movie star. Hope I didn’t interrupt your big romantic scene or anything. Jim smashed his elbow up skating this afternoon, can’t make it in for third shift. Can you maybe cover for him, and then he’ll owe you, provided he doesn’t break his neck, too?”

Bill sighed, feeling Hank Chandler fade as the real world beckoned. Saving the Earth from the Martians would have to wait until Saturday, when they could resume shooting.