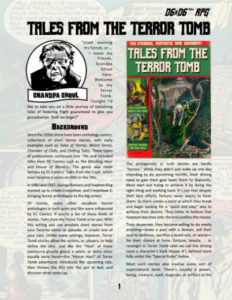 Since the 1950s there have been anthology comics of short horror stories: Tales of Horror, Weird Terror, Chamber of Chills, Chilling Tales, and many more. Creepshow and Creepshow 2 brought the genre to the big screen, and Tales from the Crypt to TV.

In this “Tales from the Terror Tomb” setting you play the doomed protagonists of such tales. Hardly “heroes.” all have given in to their baser natures to acheive their heart’s desire. They’ve succumbed to the lure of a supernatural being, magician, or artifact, and now that “quick fix” becomes their undoing.

“Terror Tomb” adventures are all about that doom. Each player character scrambles to delay their own destruction by backstabbing and sacrificing the others. In this setting it‘s not only okay to let loose and be nasty, it’s expected! In the end everyone suffers their well-deserved damnation.