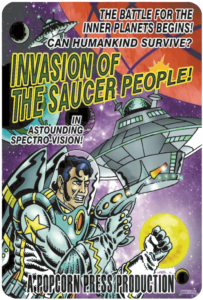 It’s the year 1999, and humankind has spread from Earth, with thriving colonies on Mercury, Venus, and Mars. The Terran Service Rockets (TSR) carry passengers and cargo among these planets. Those same ships are commissioned as the Guardian Defenders of Worlds (GDW) in case of external threat.

So far, the only dangers have been from rogue asteroids. Today, however, long-range sensors detect a fleet of alien ships approaching, capturing or destroying everything in their path. Can you and your fellow captains defend the inner planets from the Invasion of the Saucer People!

Based on the cooperative card game, the “Invasion of the Saucer People” setting is a nostalgic treatment of 1950’s sci-fi space adventure. Player characters can be rocketship crew or other adventturers in the Solar System—even a robot navigator or space monkey engineer!

Travel among the worlds, from Earth to outposts on the Moon, Mercury, Venus, and Mars. Visit Ceres Station in the Asteroid Belt. Resupply observatories on the moons of outer planets, or on cold and distant Pluto.

And defend the Solar System against the Saucer People’s invasion!