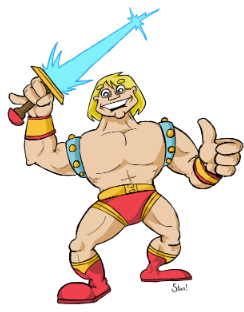 In the year 1984, a rogue asteroid slammed into the moon, spraying the earth with alien spores and moon dust. The earth’s magnetic poles shifted, continents and oceans changed, and chaos reigned for a thousand years. Some civilizations fell into a magical sleep. Others were overgrown by alien jungles. Ancient technologies and alien magics struggled for supremacy.

Now, to this broken land have come the evil Skele-Mat and his champion chimaera* Tia-Tor, determined to enslave the world. Opposing them are the heroic He-darr the Barbellian, carrying the legendary Sunday Sword, and his companions the Aerial Princess and Uckla the Mook.

But Skele-Mat has many servants, and He-darr can’t be everywhere. So the mysterious Chamber Master has summoned you and your friends from an ancient amusement park to come join the fray!

“Chambers and Chimaeras*”TM is a setting of tongue-in-cheek adventure in a world of 80’s Saturday morning fantasy cartoons.

Get it on DriveThruRPG!