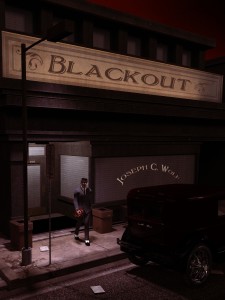 Adventure in a world of 1930s noirpunk—a sepia-toned, neon-lit, art-deco cityscape ravaged by the Industrial Revolution and the soul-crushing horrors of the Great War—not to mention a subtle invasion by a malignant alien intelligence!

The Blackout setting exists on an alternate Earth, where Europe was virtually destroyed in the Great War of 1914 to 1918, and the United States was reduced to competing city-states separated by vast tracts of wasteland. The common folk have largely lost faith in technological advances, not the least because an alien entity now occupying the planet’s ionosphere occasionally brings electrical devices to malevolent life!

Players take role of government Snuff Squad agents sent to hunt down these rogue machines, even using their own powers against them.

Get the game setting here.