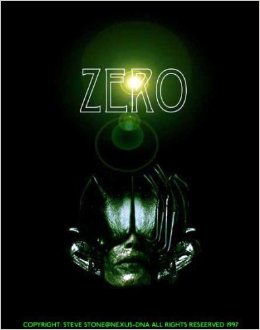 Some years back, Tony Lee and I had a debate about minimum number of attributes in a role-playing game. He put together Maximum Damage,

a game with two attributes (Body and Mind, as I recall). I responded with the mechanics for Steve Stone’s Zero setting,

a game with only one: Focus. The number of skills/abilities you chose became your Focus number, which you had to roll above on a quasi-logarithmic scale of 1d6 x 1d6. For unknown skills, you could roll below that Focus number. For “rusty” skills—things you once knew but hadn’t recently used—it was less than or equal to the Focus number.

Add a few rules for difficult or time-consuming tasks, simple combat ranges (brawl, throw, shoot, view, and out of sight), movement rules, and equipment descriptions. Then set it all in a telepathically linked human anthill with a mad queen (this was before the Borg queen of Star Trek: Next Generation, by the way), and the result was Zero.

In the spring of 2013, I dusted off that old system and started mulling it as a quick-and-easy framework for convention one-shot adventures and short campaigns in unusual settings. At QuinCon 28, I gave it a try with “Ghost of a Chance“—a setting in which the players’ characters are people who have died before their time. The response was very encouraging.

So I started building the rules chapter by chapter on this website. By developing it in public view I hoped to accomplish two things: (1) encourage new designers to create their own role-playing games, by showing a process I’ve learned over decades of professional publishing, and (2) impel myself to actually finish the thing.

As part of that process, I began to list of genres I’d like to have the game to cover, and by happy accident fell into the idea of promoting other people’s novels as settings. In August of 2014 a Kickstarter project funded publication. Another in December of that year funded the Doubledice shown on this site’s homepage. Another happy accident brought about the business card PC sheets. And the game was off and running. It’s now a best seller on DriveThruRPG.com and continuing to grow.

But the core rules remain free on this website, where they were first drafted. I hope you’ll have some fun with them. Cheers!

One thought on “1. Preface”