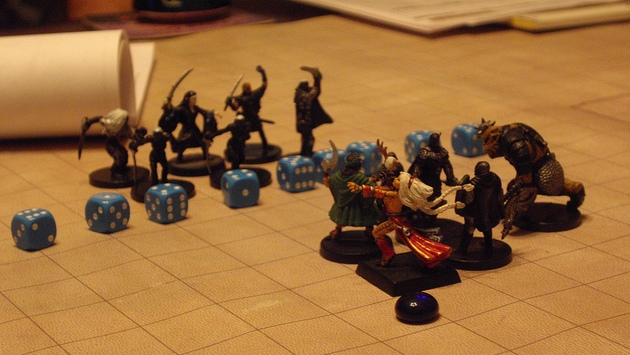 Chances are if you’re reading this, you’re already familiar with the topic of paper role-playing games. But just in case you’re not, let’s cover a few basic ideas.

This sort of role-playing is a collective story telling. Most often it’s a social gathering rather than online. Each player invents a character to portray in a fictional tale; one player—whom we’ll call the game host—portrays all the villains and extras and generally adjudicates the game rules. Those rules involve some definitions of character abilities and a way of rolling dice to simulate the uncertainty of characters’ success at their efforts.

Some role-playing games are massive tomes, with countless expansions to cover all sorts of situations, to add new character and creature types, to define new types of equipment or magic spells. Other games are “rules light,” serving as a bare springboard for the imagination.

These D6xD6 RPG rules lie somewhere in the middle. They are designed with three purposes in mind:

Welcome to my worlds—and to those various friends and colleagues have contributed to the project.