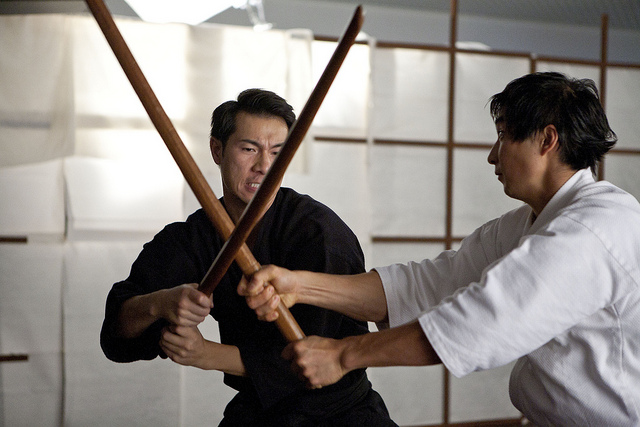 “The greatest victory is that which requires no battle.”
—Sun Tzu, The Art of War

Sun Tzu’s advice aside, sometimes one must accept less than the greatest victory. When combat is inevitable in a D6xD6 RPG adventure, the following rules apply.

Combat in the D6xD6 RPG rules is designed to be fast and furious.

To determine what happens when, each round begins with declaration, followed by dice rolling and resolution.

Concepts of distance and movement in these D6xD6 RPG rules are relatively simple, playable either abstractly or by use of miniatures.

Note: For combat on US soil, in Liberia, and in Myanmar, use yards instead of meters, and round off 2 km to 1 mile.

During a round of combat, a character can freely move up to 2 meters and still take an action (or vice versa).

To move more than 2 meters requires a “movement action.” The player uses the Athletics skill or an appropriate occupation. Each level of success adds 2 meters to the character’s movement. While this sort of movement action starts at the character’s rolled number in the turn sequence, it is considered to progress through the rest of the turn. So the game host will decide whether any enemies along the way have a chance to attack the character as planned.

Attacking an opponent is an action (as defined under “Combat Time,” above).

Human characters in these D6xD6 RPG rules can suffer six levels of damage: graze, stun, hit, wound, knockout, or kill. Each of those terms represents a different degree on a sliding scale of damage.

Added Damage: A successful attack that causes less than or equal to its target’s current damage increases the target’s damage by one stage. (E.g. a “Hit” character who receives a “Graze” is now “Wounded.”)

Superseded Damage: A successful attack that causes more than its target’s current damage becomes the target’s new damage. (E.g. a “Grazed” character who receives a “Stun” is now “Stunned.”)

Different weapons have different default damage ratings, as shown on the weapons table below. If an attacker rolls bonus levels of success, each bonus level increases the damage rating by one step. (Note: A “Kill” increases to an “Overkill,” making defense more difficult.)

Some settings may provide additional weapons or further details. For most purposes, however, the following table will serve.

To keep combat moving quickly, most D6xD6 RPG settings treat defense as an automatic rating, based on a character attribute or protective clothing.

Innate abilities and training alike help to avoid damage or to resist its effects. In the D6xD6 RPG, each attack type or weapon type lists the occupation, skill, or attributes that can defend. If a target character has “Focused” any of the listed defenses for that attack, the character reduces the attack damage by a single step (“Graze” to nothing, “Stun” to “Graze,” etc.). A character cannot reduce damage more than one step in this way.

While reactive defense helps either to avoid being hit or to withstand damage, armor helps to either absorb or deflect damage. The “Armor” table below lists reduction to damage based on type worn. This rating is used instead of the wearer’s reactive defense; it does not add to it. Note also that armor imposes a slight penalty on its wearer’s actions: subtract the character’s armor rating from the calculated result of all rolls that character makes. (E.g. a character wearing a Kevlar jacket would subtract 2 points from all rolls—meaning a roll of 5 • 6 would result in 28 instead of 30.)

While the above rules cover most combat situations, the game host may allow any or all of the following rules for special situations.

Even in the heat of combat, it can help to take a moment to catch your breath. In game terms, a character can spend an action to immediately recover from damage. The player rolls vs. either Will or Brawn; on a successful roll, the character recovers one level of damage. Each bonus level of success recovers another level of damage.

Sometimes a character may want to delay taking an action until another has acted. The character with the higher dice roll determines whether his or her action occurs immediately before or immediately after the other character’s.

Example 1: The character wants leap onto the running board of a getaway car that is coming for her. She holds her action until just after the driver’s, and then makes the leap.

Example 2: The character is waiting for an alien carnivore to attack her (and expose itself) before she shoots it. She shoots just as it reveals itself, before it attacks.

As explained in chapter 3, “Dice and Tasks,” characters can combine their efforts on a single task. When timing is an issue—e.g. moving a heavy table to barricade a door—the action takes place on the lowest roll. When timing is not an issue—e.g. holding an already barricaded door against an onslaught of zombies—the action is considered to last the whole turn, from 36 to 0.

Sometimes players may roll successfully, only to have their characters’ actions countered by a faster action. (E.g. a character intends to punch an alien, but the creature teleports away before the blow lands.) In such cases, the game host may allow a character to choose a different target for the same action—at one success level less. If this reduction drops the success below one level, that character’s action is negated.

A character who spends consecutive turns preparing an attack may add to its damage. When the attack occurs, if the roll is successful, each turn spent aiming adds one level to the damage dealt. If the roll fails, however, the turns spent aiming are simply wasted.

A character who achieves more than one level of success with an attack may choose to split those successes among several targets rather than add them all on one target. (E.g. a character using a small pistol with a Shooting skill and a Focus of 5, on a roll of 25 could hit one target for a Wound, or three targets for a Stun each, or one target for a Hit and another for a Stun.) Note that bonus levels gained from aimed attacks (see above) may also be split this way.

Just as the game host rolls all dice for the evil forces and then chooses where to assign them, several players may pool their dice in order to portion them to best effect. To do this, those players must choose as team leader a character with a “Peacekeeper” occupation (see Chapter 5: “Occupations”). That character’s player then rolls all their dice together and assigns them to each character for best effect.

While this strategy can be very effective, players are never obligated to join the team or to remain in it from turn to turn. If they do join, however, they are obligated to use the dice assigned to them that turn.